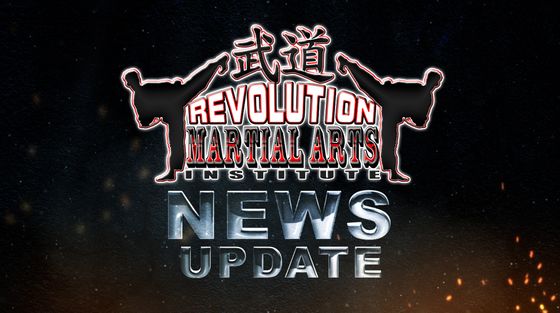 I hope you all had an enjoyable Thanksgiving Holiday! As 2022 rapidly comes to a close (I know, it goes by so fast), I wanted to share with everyone a few remaining dates for the end of the year before we go into our annual winter break. Be sure to always check our social media pages, our blog page, emails and all of the normal lines of communication to stay in the loop about everything going on. We try to give a variety of different outlets to keep everyone informed.

First, we wanted to thank everyone who participated in our Annual Holiday Sale. We hope you were able to find some RMAI related gifts for the Karate warrior in your family. Thanks also to Maddie Clark who came in on Friday to run the event, she did an excellent job. I wanted to make sure I publicly thanked her for her work. For those who might not know, in addition to working behind the counter, and training in martial arts at RMAI, Maddie is also a writer. You can check out some of her work on our blog (click here:...

I just wanted to put out a few reminders and updates about this week.

We are open for regular classes Monday, Tuesday and Wednesday this week. Closed for the Thanksgiving Holiday weekend, Thursday through Sunday. Regular classes will resume on Monday 11/28

Come to the studio on Friday November 25, between 12-4pm for our Black Friday sale. Save on sparring gear sets as well as training equipment, apparel and more. You can also check our online shop. Click the link below: https://revolution-martial-arts-institute.square.site/

FLYERS DEMO - The window for selecting new people to participate in the demo on 12/17 has closed, however a few people need to pay for their tickets still, please see me or Maddie to get settled up. We do plan on adding a few extra practices before the big event, but this is what we have so far:

Good Afternoon everyone, a few quick reminders about this week!

Testing for students will be TODAY MONDAY 11/14 during regular class time for students Blue Belt and UNDER. There will be NO Classes during testing. Good luck to everyone

Those who successfully pass all requirements today will be striped up and invited to the graduation this Friday at 7:00pm

Hey, just letting you all know the window for getting involved in RMAI’s performance at the Flyers game is closing up fast, but there’s still time if you sign up before Wednesday (November 16th) We want you to be involved, tickets are required to enter the building, and the price is $65. Get signed up now, here is the remaining practice schedule:

Good morning everyone! A few reminders and a couple of changes to our calendar, so please take note.

This Friday night, is our final Black Belt pre-test. Test begins sharp at 5:30pm. There will be no 'run' the next morning. good luck everyone.

Our RED BELT exam was originally scheduled for this Saturday, we have now rescheduled it for next Saturday 11/12/22 at 10:00am. There will be NO regular classes that day.

DEMO TEAM has the following changes to practice schedule:

As you know, DOBOHK means Martial Arts Uniform. In a clever (at least I think so) play on words, we are having a week of classes where everyone will be required to wear regular clothes to class... hence the "no bohk" From Monday 11/7 to Saturday 11/12 students will NOT wear their dobohk to class. (ALL CLASSES) Comfortable workout clothes is... 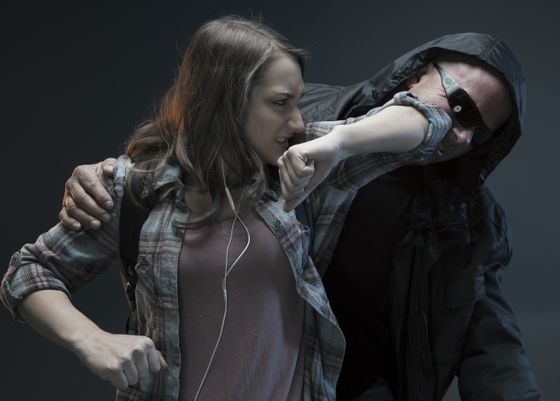 The Forgotten Importance of Self-Defense

When I started doing karate here at RMAI, I was mainly in it for the exercise and physical

conditioning aspects. It wasn’t until I began moving up a few belts that I really started to pay

more attention to perhaps the most important nuance of martial arts…self defense.

If you go back and study the origins of our two parent styles, Tang Soo Do and Taekwondo,

For those who have taken a class here with Master Celona, you’ve probably heard him talk

techniques during times when you don’t have a partner available. For example, while the first

stepping center punch, the low block can actually be used as an armbar and the stepping... 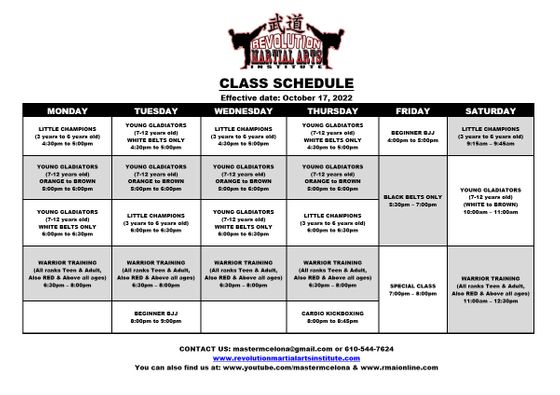 Due to the size of the Young Gladiators class, we've decided to add an extra session for White Belts only (9th and 10th Gups) See the schedule below. The shortened 30 minute session will enable us to provide a more beginner-friendly lesson plan and attention. Students who are 9th gup (White Belt with Black Stripe) who earn the first 2 progress stripes will be permitted to join the full hour class. Added schedule is as follows:

Regular Young Gladiators schedule for Orange to Brown belts will still be held at the normal time.

As you know, DOBOHK means Martial Arts Uniform. In a clever (at least I think so) play on words, we are having a week of classes where everyone will be required to wear regular clothes to class... hence the "no bohk" From Monday 11/7 to Saturday 11/12 students will NOT wear their dobohk to class. (ALL CLASSES) Comfortable workout clothes is fine, or even jeans... choice is... 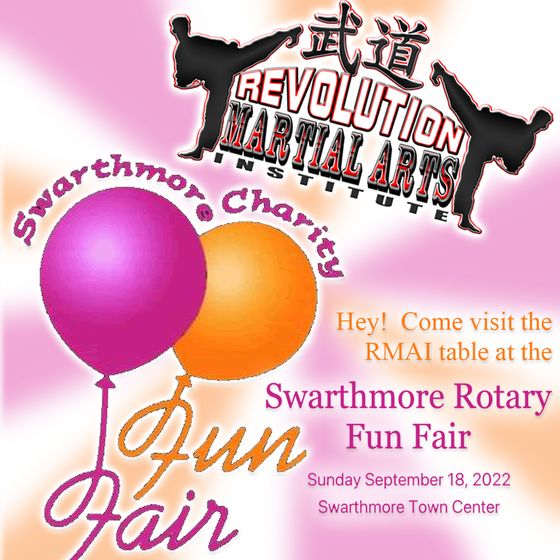 Hello everyone, I wanted to remind everyone about RMAI participating in tomorrow's Swarthmore Charity Fun Fair. We will have our booth set up in space #1 which is supposedly set up across the street from the Dunkin Donuts on Park ave, (across from the train station). Our booth will be set up by 11:30am. We will be there all day if you'd like to stop by.

We would greatly appreciate as many students as possible put on their uniforms, and walk in the parade with us. We are set to meet at 11:45am on Park Avenue, just past the Methodist Church. Look for me in uniform with the other students.

Maybe if enough of us are there, we can show some techniques!

I look forward to seeing you all tomorrow!

Monday September 12 we will be holding GUP Testing in our regularly scheduled classes. As of this date this is the list of names, which may be subject to change depending on student performance.

Good luck to the candidates

Like a lot of things that are coming up for the remainder of the year, we are reprising our presence at this year’s Swarthmore Fun Fair. On Sunday, September 18th, we will be hosting our own booth within the Swarthmore Village. This is a chance for us as to show off our awesome school to those in the community and convince them to be warriors in training like us. Maybe not that exact wording but you know what I mean. Students are encouraged attend in full uniform help demonstrate some skills, do a little breaking, and...

You're Never Too Old to Be a Warrior

Having just turned 24 a little over a month ago, I am, by most people’s standards, still very

young. With the average life expectancy of a human now being 78.6 years old, I technically still

have about two thirds of my life left to live.

Speaking from a karate standpoint on the other hand, I feel as though my age isn’t doing me any

During the first six months to a year of being at RMAI, I was often the oldest beginner belt in the

room while there were several kids who, despite being younger than me by more than half my

age, were still considered my seniors in terms of rank.

Though I try not to compare myself to others, which is a constant issue I have, not only in karate

but in all aspects of life, I often look at some of these “Karate Kids” and find myself a little

envious of them. I didn’t start doing karate until after I had graduated college while a lot of the

For a lot of these kids who’ve been training for most... 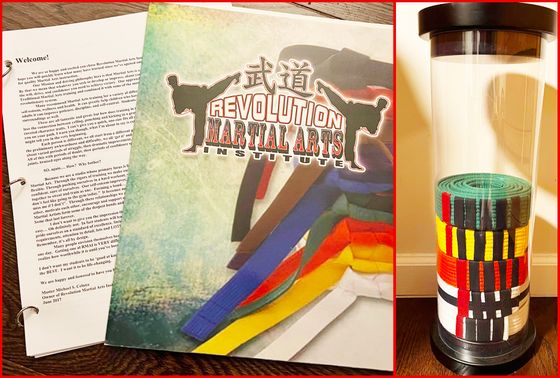 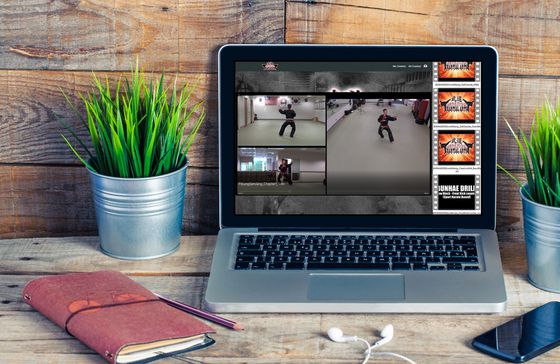 Welcome to our Blog!

We are finally doing something with this section on our site, so if you're interested in contributing to our RMAI Blog, send me an email to mastermcelona@gmail.com with the subject: BLOG POST and if approved, it will appear on this page!