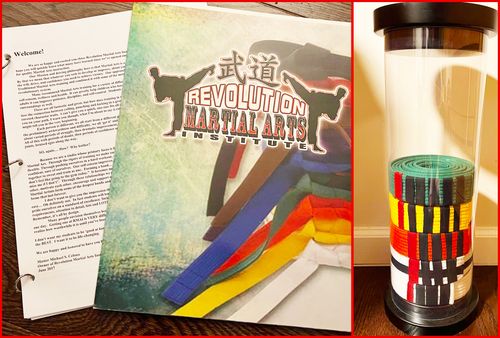 that by sharing some of my experiences, I can create some sort of dialogue for everyone that’s a

part of this karate loving community; whether you’re a current or former student, the parent of a

student, or maybe someone like myself who having never had any previous martial arts training

now can’t imagine what my life would be like without it. That might sound a bit dramatic but I

am a writer at heart and we tend to have a flare for the dramatic.

I originally decided to try out karate as a way to get more active again. I was an avid field

hockey player throughout high school but being that I went to a division one college, I knew that

my playing career wasn’t going to carry me through the next four years of undergrad. I was

good…but I can admit I wasn’t D1 good. During college I dabbled with rugby for a semester,

played a bit of club tennis, started getting really into doing yoga in my dorm; much to my

roommate’s amusement, but nothing really stuck for a long stretch of time.

My mom actually brought up the idea for me to try karate. Now she always jokes that I should

quit with how banged up I come home after classes during the week. To quote the words of

Master Celona, “but did you die?”

Leading up to my first class on November 12, 2020, I was extremely nervous. Aside from

wanting something active to do, I had no real idea of what to expect outside of the karate kid. I

it for the uniform at that point.

ahead of time; contacts, change of clothes, water; not that we’re allowed to drink water during

While I didn’t know this at the time, the classes during the week used to either be split up by

rank or by age. Since my first class happened to be on a Thursday, I would end up in a class split

up by rank, white to yellow belts. Now on the surface that seems fine, right? It’s my first day so

I’ll be in a class with all beginners like me. All the flying headbutts will be saved for the more

advanced classes. To my initial shock, however, upon looking around the room at the rest of my

classmates. I noticed something a bit peculiar. Everyone was about a whole two feet shorter and

at least 12 years younger than I was. Oh great, I’m the only adult in a sea full of children, this’ll

be so much fun. I hope my sarcasm here is pretty evident.

Now being a fifth gup with year and a half of training under my belt, haha karate joke; I can’t

imagine not having walked to RMAI on that fateful day; even with all of the initial

arts journey that I’m on, a good enough time has passed for me to look back and see how far I’ve

come. It’s almost funny to think about white belt Maddie not knowing what a kihap was or what

foot steps and what hand does the block in line drills; those still trip me up sometimes to be

honest. The great thing that I’ve come to learn about martial arts is that it’s so multifaceted.

While most people see karate as being solely about kicking and punching, that only scratches the

surface. That’s honestly what I thought karate entailed, and was I wrong. So if you’re worried

flying side kick over four people, do not fret, because I honestly believe that there’s something in

martial arts for everyone to excel at.

Anyway, I hope to have more conversations like this with you all. I’ll have to come up with a

catchy slogan for this blog in the meantime. Maybe Karate conversations with Maddie or the

Revolution of RMAI’s karate blog…don’t worry. I’ll work on it. For now, I’ll end this how we